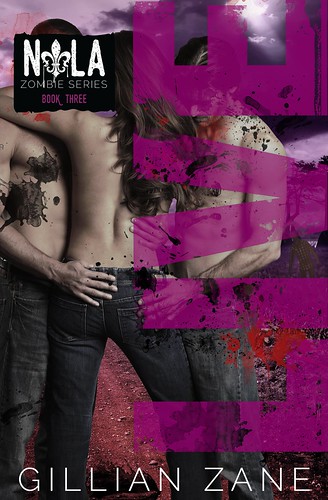 Blurb:
LIVE | The Third and Final Book in the best-selling NOLA Zombie series by Gillian Zane.

Alexis, Blake and Zach survived the zombie apocalypse but found a new enemy to fight.

Alexis has been taken. Zach and Blake are desperate to find her. The men are pretty sure they know who took Alexis, but they have to find those people and that task is a daunting one. There are millions of places to hide in the swamps of Southern Louisiana and Zach and Blake will not stop until they've searched every one of them. Alexis will be returned to them if it's the last thing they do.

Falling back on their military training the men are confident in their success. The problem is, the group that took Alexis, didn't keep Alexis. They sold her. She's now the property of the Southern Clan and there is nothing she can do about it.

The undead still roam the streets of New Orleans. S-Island mourns the loss of one of its own. And the NOLA Zombie series comes to a close with a shocking conclusion. You don't want to miss a paragraph...

You can find Live on Goodreads

Gillian Zane is the author of the NOLA Zombie series. Zane is the pen name of a prominent blogger in the publishing industry, which will remain a mystery unless you Google it. Since she can remember her goal has been to become Master of the Universe and has decided to focus first on the literary world. Things are progressing nicely.

Zane has been a freelance writer for the last ten years and has published a few non-fiction works, none of which was very exciting. Zombies are much more exciting and a way for her to combine her two current obsessions, hot boys with guns and Doomsday Prepping. When she isn't stockpiling MREs (Meal's Ready to Eat) or researching how to build a cistern on a budget, she's taking care of her little family and exploring the city that she loves, New Orleans. You can find Gillian Zane on twitter @GillianZane.